The city was supposed to shine even brighter on the occasion of the 800th anniversary of the city after the waste collection campaign – and they succeeded! Almost 200 citizens responded to the call in bright sunshine, equipped with high-visibility vests, garbage grabbers, gloves and garbage bags, to collect all kinds of garbage throughout the city. “We are very happy about so many registrations and the great commitment” said organizer Tanja Bohn from the B+T Group. And also the building yard of the city Alsfeld which supported energetically is enthusiastic about the event character of the meeting. The event started with welcoming speeches by Mayor Stephan Paule and Managing Director of the B+T Group Ralf Bohn; he explained the role of ZAV for waste management in the Vogelsberg district and what B+T produces from the collected waste and explained that the non-recyclable part of the collected waste is converted by B+T into regional energy. As an anniversary gift, B+T is donating this energy value to the city of Alsfeld in the form of electricity, so that the city will shine even brighter on its anniversary. After the entertaining speeches, the groups of active people were divided up into the city areas by the building yard and they were already fully motivated to get to work. It was clear that prizes had been offered for the largest group, the largest amount collected and the most amazing find, which were contributed by VR Bank Hessenland, among others.

“Many Alsfelder*innen do not know at all, what we make as B+T Group – we would like to present ourselves gladly and show in a small exhibition on our area the garbage collectors, in addition, interested ones from the city and the region, how one recovers valuable materials from waste and also high-quality fuels from it can manufacture, which B+T converts to regional energy”, leads out Tanja Bohn.

After almost three hours, the hard-working collectors returned and were treated to sausages, drinks, coffee and cake. The hôtel villa raab had set up the catering for the event.

The 200 active participants collected no less than two tons of waste – a strong result. This means 2,000 kwh of electricity as an anniversary present from B+T for the town of Alsfeld, because one kg of waste produces about 1 kwh of electricity.

With a total of 24 participants, the young athletes from SV Altenburg were able to celebrate the prize for the largest group with a loud cheer. Gudrun Walter and Ulrich Kossmehl collected the largest amount per person with just over 50 kg each and were also rewarded with a voucher for a special experience in the city of Alsfeld. Particularly great was the joy about the prize for the most special find which went to the kindergarten Altenburg and was rewarded with the special coinage of a silver ounce donated by the VR Bank for the 800th anniversary of the city of Alsfeld.

Environmental and climate protection right on our doorstep – a sunny experience for young and old with high value and current significance. 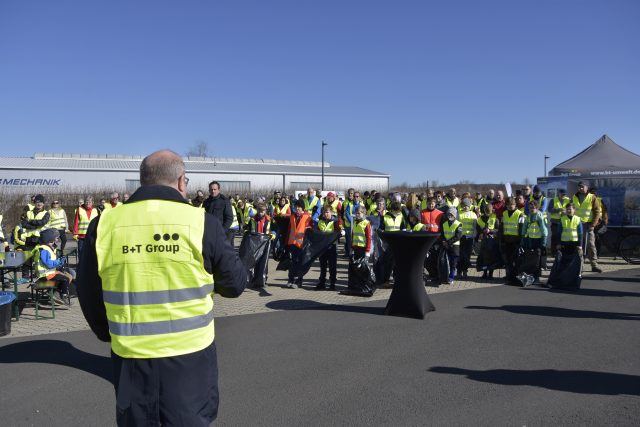